Unfortunately, there are a number of misconceptions and falsities regarding the Dakota Access Pipeline that have been perpetuated by media outlets, bloggers, and social media accounts. Here are the facts:

The Dakota Access Pipeline is one of the most technologically advanced and safest pipelines ever built. It surpasses federal safety requirements. In August of 2018, the U.S. Army Corps of Engineers completed more than a year of additional study of the Dakota Access oil pipeline, saying the work substantiated its earlier determination that the pipeline poses no significant environmental threats. Another pipeline in the same area has operated beneath Lake Oahe for more than 35 years. 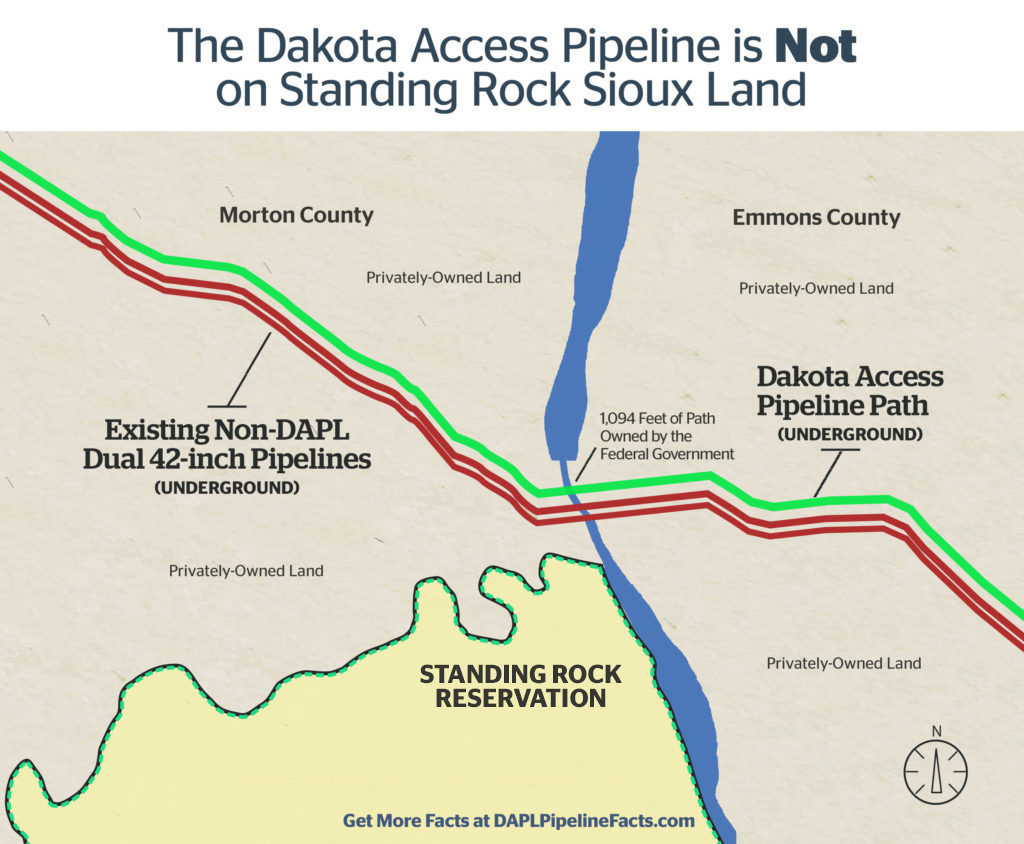 Here are some helpful links that provide further detail and background information that have been missing from the conversation:

DAPL Facts You Should Know

DAPL follows the same route in this area as the Northern Border Pipeline, which has operated beneath Lake Oahe since its construction in 1982. Twelve other pipelines cross the Missouri River north of DAPL. No part of the pipeline comes in contact with water from the Missouri River or Lake Oahe. Contrary to some reports, the pipeline has not impacted groundwater in any of the four states through which it passes.

Yes. The builders of the Dakota Access pipeline adhered to all federal, state, and local laws and regulations. The Dakota Access Pipeline was approved by regulatory agencies in all four states where the pipeline operates and by the U.S. Army Corps of Engineers. All told, more than 1,000 certificates, permits and approvals were granted for the pipeline - that's about one permit or approval for every mile of pipeline.

Yes. The United States Army Corps of Engineers had hundreds of contacts with dozens of tribes while the Dakota Access project was under review. In addition, the U.S. Army Corps reached out to the Standing Rock Sioux Tribe nearly a dozen times to discuss archaeological and other surveys conducted before finalizing the pipeline route. During the planning phase, Dakota Access worked with the North Dakota State Historic Preservation Officer and contracted professionally licensed archaeologists to conduct Class II and Class III cultural surveys. We also reached out to the Standing Rock Sioux Tribe's Historic Preservation Officer, but were unsuccessful.
Learn more in the helpful link above titled "Memorandum Opinion".

No. There were no Native American artifacts disturbed during construction. During construction, tribal monitors from a number of tribes monitored construction activities in all four states to ensure there was no disturbance of cultural sites. Specific to North Dakota, in a memo, dated September 22, 2016, Paul R. Picha, the Chief Archaeologist of the State Historical Society of North Dakota wrote: In conclusion, the cultural resources inventory and inspection conducted and reported herein yielded no evidence of infractions to or violations of North Dakota Century Code 23.06-27 with respect to disturbance of human remains.

Does Dakota Access Pipeline affect the water source for the Standing Rock Sioux?

No. At no point does the Dakota Access Pipeline pass through the Standing Rock Sioux reservation, nor does it impact the Tribe's water supply. The new water inlet for the Standing Rock Sioux Tribe (plans to move their water supply were in place prior to the pipeline) is about 75 miles away from the pipeline. But rail lines that can transport crude oil cross the Tribe's reservation and Lake Oahe are only two miles upstream of the Tribe's new water intake.

Yes. The Dakota Access Pipeline is an entirely underground pipeline. Only where there are pump stations or valves stations is there any portion of the pipeline above ground. The pipeline is buried 4 feet deep in most areas and in all agricultural lands, 18 inches deeper than required by law. [Note: DOT Part 195.248 requires 30 inches of cover in agricultural lands. Thirty-six inches of cover is required in all industrial, commercial and residential areas.] At the Lake Oahe crossing, the pipeline is buried approximately 95 - 115 feet below the bottom of the riverbed.

What happened at the Dakota Access Pipeline protest in North Dakota?

The protests cost the state of North Dakota a lot of resources and money. According to local law enforcement, protesters provoked multiple dangerous and criminal confrontations and caused significant damage to property. Additional police were brought in from all over the country to help during the protests. North Dakota's congressional delegation has asked the federal government for $38 million to cover the cost of policing the protests against the Dakota Access Pipeline. Approximately 21 million pounds of trash, debris and waste was ultimately removed from the protest site at Lake Oahe, costing over $1 million in clean up and causing significant concern for the health of the lake. Corps Capt. Ryan Hignight said a total of 8,170 cubic yards of debris was removed from the three camps - Sacred Stone, Oceti Sakowin and Rosebud - all within the flood plain on federally managed land. In 2017, Energy Transfer gifted the state of North Dakota $15 million to help cover costs.

The most vocal opposition was supported by several well-funded activist groups that are opposed to the development and use of all fossil fuels, and who ignore the safety and benefits of the pipeline in order to further their membership and fund-raising efforts. Research has shown that environmental groups paid out-of-state people to travel to North Dakota to protest and get arrested - many of which spread false narratives about the pipeline to incite further unrest.

How does the pipeline benefit Native Americans?

Multiple Native American tribes in the U.S. benefit from oil and gas development on their land. In North Dakota, the Mandan, Hidatsa and Arikara (MHA) Nation recently negotiated a more favorable tax revenue sharing arrangement with the state from new oil and gas activity on trust and fee lands. The tribe (also known as the Three Affiliated Tribes) earns this revenue based on the amount of oil produced on their land, with 80% of its budget coming from oil and gas royalties and revenues. The Three Affiliated Tribes use Dakota Access to transport more than 60% of the oil they produce. Accordingly, their members stand to suffer significant losses if the Dakota Access Pipeline is shut down and Bakken production fails to recover or declines as a result.